The People of Bhutan 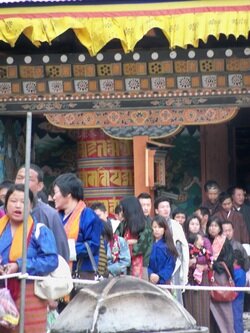 The Bhutanese are fun-loving people with a very down to earth view of life.
Dancing, singing, playing archery, stone pitching, partying, social gatherings etc.
are common things that one observes. Visiting friends and relatives at any
hour of the day without any advance notice or appointment clearly depicts Bhutanese openness.

In Bhutan, an opportunity is never wasted to impress guests with their hospitality.
It is customary to dress up the home for guests, as well as cook a wonderful meal!
Time moves a bit slower, people are less rushed. What's important are family, good
friends, and meaningful activity. It will surely be a wonderful experience coming from
anywhere else in the world. 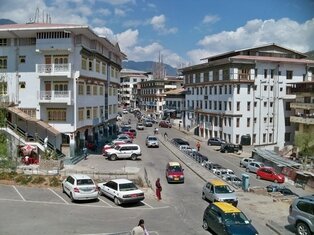 The Bhutanese society is free of class or caste system and any inhibition that is detrimental for a society to progress. Slavery was abolished by the Third King Jigme Dorji Wangchuck in the early 1950s through a royal edict.
Though, few organizations to empower women have been established a few years
back, in general the Bhutanese have always been gender sensitive. In general
ours is an open and a good-spirited society.

Living in a Bhutanese society generally means understanding some basic norms
like Driglam Namzha, the traditional etiquette. This is a norm that desires
members of the society to conduct themselves in public places. Wearing a scarf
when visiting a Dzong or an office, letting the elders and the monks serve
themselves first, offering felicitation scarves during ceremonies such as
marriages and promotions, greeting elders or senior officials are some simple
manners that harmonizes and binds together the Bhutanese society.


Normally, greetings are limited to saying Kuzuzangpo amongst equals. For
seniors and elders, the Bhutanese bow their head a bit and say kuzuzangpola.
But, the western ways of shaking hands has become an accepted norm.

Bhutanese people can be generally categorized into three main ethnic groups.
The Tshanglas, Ngalops and the Lhotshampas. The other minority groups are the
Bumthaps and the Khengpas of Central Bhutan, the Kurtoeps in Lhuentse, the
Brokpas and the Bramis of Merak and Sakteng in eastern Bhutan, the Doyas of
Samtse and the Monpas of Rukha villages in Wangdue Phodrang. Together the
multiethnic Bhutanese population number slightly more than 6,00,000.


Tshanglas: The Tshanglas or the Sharchops as they are commonly known are
considered the aboriginal inhabitants of eastern Bhutan. Tshanglas or the
descendants of Lord Brahma as claimed by the historians speak Tshanglakha and
are commonly inhabitants of Mongar, Trashigang, Trashi Yangtse, Pema Gasthel and
Samdrup Jongkhar. Besides cultivation of maize, rice, wheat, barley and
vegetables, the Tshanglas also rear domestic animals to supplement their living.
Weaving is a popular occupation of women. They produce beautiful fabrics mainly
of silk and raw silk.


Ngalops: The Ngalops who have settled mostly in the six
regions of western Bhutan are of Tibetan origin. They speak Ngalopkha, the
polished version of Dzongkha which is the national language of Bhutan.
Agriculture is their main livelihood. They cultivate rice, wheat, barley, maize
etc, among others. In the regions of Thimphu and Paro apple is also cultivated
as cash crop. They are known for Lozeys, or ornamental speech and for Zheys,
dances that are unique to the Ngalops.


Lhotshampas: The Lhotshampas who have settled in the
southern foothills are the latest to settle in the country. It is generally
agreed that they migrated from Nepal in the beginning of the 19th
century mostly coming in as laborers. They speak Lhotshamkha which is the Nepali
language and practice Hinduism. One can find various castes of Lhotshampas
including Bhawans, Chhetris, Rai’s, Limbus, Tamangs, Gurungs, and the lepchas.
They essentially depend on agriculture and cultivate cash crops such as like
ginger, cardamom, oranges, etc.


The Bumthaps, Mangdeps and Khengpas: The people who speak
Bumtapkha, Mangdepkha and khengkha respectively inhabit the central pockets of
Bhutan. The Bumthaps cultivate buck wheat, potatoes and vegetables. A section of
this population also rear yaks and sheep and produce fabrics of wool and yak
hair. The Mangdeps depend on cultivation of rice, wheat, maize, vegetables, etc
besides rearing domestic animals. The khengpas also depend on agriculture
similar to the Mangdeps. However, they are also known for the bamboo and cane
craft.


Kurtoeps: Kurtoeps are the other category of people in the
east. They inhabit the district of Lhuentse and the villages are found spread
along the banks of Kurichu. Khoma women are expert weavers and are known for
their skill in weaving the grandiose Kushithara.


The Brokpas and the Bramis: The Brokpas and the Bramis are a
semi nomadic community. They are settled in the two villages of Merak and
Sakteng in eastern Bhutan. They mostly depend on yaks and sheep for livelihood.
Living in the high altitude zones they hardly take up agriculture. They speak a
different dialect and have their own unique dress that is made of yak hair and
sheep wool. They are also experts in cane and bamboo crafts.


The Layaps: To the extreme north are the Layaps who speak
the layapkha. Like the Brokpas, they are also semi nomads whose source of
livelihood is dependent on yaks and sheep the products of which they barter with
the people of Wangdue Phodrang and Punakha with rice, salt and other
consumables.
The Doyas: These are the other tribal community
and are settled mostly in southern Bhutan. They are considered the aboriginal
inhabitants of western and central Bhutan, who over the years settled in the
present areas in Dorokha. They have a dialect of their own and dress in their
own unique style.


Monpas: The Monpas are a small community in Rukha under
Wangdue Phodrang. Together with the Doyas they are also considered the original
settlers of central Bhutan. They speak a different dialect unique to their own
but one that is slowly ding as these people are now being absorbed into the main
stream Bhutanese society.