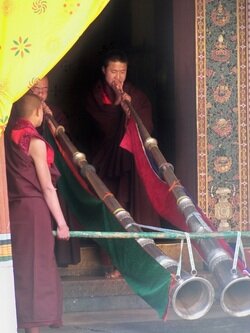 Bhutan is a Buddhist country and people refer to
it as the last stronghold of Vajrayana Buddhism. Buddhism was first introduced
by the Indian Tantric master Guru Padmasambhava in the 8th century. Till then
people by and large worshipped all forms of nature, remnants of which are still
evident even today in some remote villages in the country. The older form of
religion was referred to as Bon and was accompanied by offerings of animal
sacrifice and worshipped a host of deities invoking and propitiating them. They
believed in invisible forces and considered them as the rightful owners of
different elements of nature. Mountain peaks considered as abodes of Guardian
deities (Yul lha), the lakes as inhabited by lake deities (Tsho mem), cliffs
resided by cliff deities (Tsen), land belonging to the subterranean deities
(Lue), land inhabited by (Sabdag), water sources inhabited by water deities (Chu
gi Lhamu), and dark places haunted by the demons (due) etc. 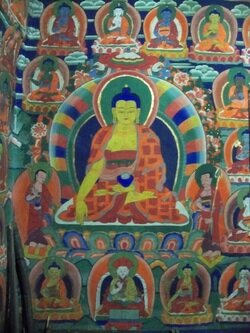 With the visit of Padmasambhava, Buddhism began
to take firm roots and especially led to the propagation of the Nyingmapa (the
ancient or the older) school of Buddhism.

The visit of Phajo Drugom Zhigpo’s from Ralung
in Tibet to Bhutan in 1222 marks another milestone in the history of Bhutan and
in Buddhism. He was instrumental in introducing yet another school of Buddhism –
the Drukpa Kagyu that is today the state religion of the country. His sons and
descendants were also instrumental in spreading it to many other parts in
western Bhutan.


By far the greatest contributor was Zhabdrung Nawang Namgyal.
His arrival in 1616 from Tibet marks another landmark. He was not only able to
bring under his domain the various Buddhist schools that had cropped up in many
parts of western Bhutan but unify the country as a one whole nation-state and
give it a distinct identity. 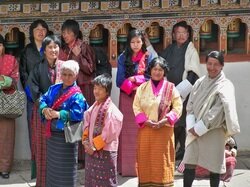 Buddhism is still vibrant and alive. The Dzongs,
monasteries, stupas, prayer flags, and prayer wheels punctuate the Bhutanese
landscape. The chime of ritual bells, sound of gongs, people circumambulating
temples and stupas, fluttering prayer flags, red robed monks conducting rituals,
among many others are all living case in point to reveal that Buddhism is an
essential ingredient of a Bhutanese life. 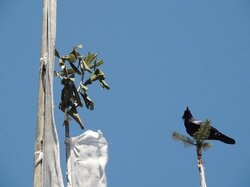 Though referred to as the last Vajrayana Buddhist country, yet one may still come across animistic traditions and beliefs being practiced by the people. Nature worship and animal sacrifice are still a
part of the Bhutanese worship. Every village has a local priest or a shaman to
preside over the rituals. Some of the common nature worship being practiced are
the Cha festival in Kurtoe, the Kharphud in Mongar and
Zhemgang, the Bala Bongko in Wangdue Phodrang, the Lombas of
the Haaps and the Parops, the Jomo Solkha of the Brokpas, the
Kharam amongst the Tshanglas and the Devi Puja amongst our
southern community. All these shamanistic rituals are being performed to keep at
bay the evil spirits, to bring in prosperity, to cure a patient, or to welcome a
new year. In all of these rituals a common feature is the offering of animals
ranging from slaughter of an ox, fish a chicken or a goat.